Miners can receive wages in two ways. The main one is the payment for confirming transactions in the form of newly created coins. The second way is to participate in the transaction fees that are charged to cryptocurrency users. Let’s take a closer look at the latter method – it turns out that sometimes transaction fees can be an important component in remuneration. The best example of this is the current situation in the Ethereum network, where the level of fees is very high.

Depending on the scalability of a given cryptocurrency blockchain, it may have different bandwidth, which translates into the ability to effectively add new transactions to blocks. Typically, when network traffic is moderate, transactions are added on an ongoing basis and the level of fees is relatively low. When the traffic in the network is increased, the network becomes jammed, as a result, users should increase the transaction fee in order to ensure a quick addition of transactions. Only transactions with higher commission will be handled by miners first. In the history of cryptocurrencies, we have had periods of increased activity several times. And so in the Bitcoin network it was a fever related to the record valuation at the turn of 2017/2018. At peak times, the cost of adding a transaction to the network could be as high as $ 50. The loudest boom in the Ethereum network was related to CryptoKitty, which overloaded the network for weeks.

The situation in the Etherum network

Currently, the level of fees in the Ethereum network is very high, the base block value is 2 ethers, currently salaries are in the range of 2.3-2.6 ETH. For a miner, this means an average income of 15-30% higher than the norm. The Ethereum development team noticed this phenomenon and started working on making the charging system more flexible. This is the essence of the motivation behind EIP1559. The point is that the transaction fee system in Ethereum is not optimal and promotes overpaying, and a way to improve this system would be to introduce a mechanism that would match the basic network fee to the network demand. As a result, the efficiency of the network fee level would increase and the degree of complexity of the part of the software present in Ethereum clients (wallets) responsible for estimating the correct level of network fees would decrease.

In the current system, a newly submitted transaction has to wait until it is included in the next block generated by the miner. Currently, the easiest way to guarantee a place in the next block is to increase the “gasPrice” parameter above the network average by this waiting transaction. A miner always tries to fill new blocks with transactions that will increase his remuneration, and a transaction with a high “gasPrice” meets this condition 100%.

The problem with such a system is that, at times of high demand, the level of network charges can quickly reach unreasonably high levels. When the blocks are almost full, users start bidding on “who will give more” and artificially inflate the value of the network fee just to secure a place in the next block. In order to minimize the impact of this phenomenon, miners have the option of increasing the number of transactions that can fit in the next block. However, this mechanism is not able to change very quickly. There is also a second fact. From the miner’s point of view, it is more profitable to settle for a small but full block than to increase the “gas limit” due to the increased risk of the appearance of “Uncle” (i.e. mining up an incomplete block). In particular, if the wallet prioritizes the inclusion of a block in the network within a short period of time, there may be times when you have to pay a network fee of several times the value of the transaction being sent.

To combat this, EIP 1559 introduces the concept of a “basic grid charge” which is to dynamically adjust in such a way that the total consumption of “gas” is to be set at 10 million. In addition, instead of ending up in the miners’ pockets, the “basic network charge” will be burned, which will destroy these coins irretrievably. However, it will be possible for the person sending the transaction to include a “tip” in it, which will go to the miner who concludes such a transaction in the block.

Due to possible problems with the implementation of EIP 1559 for the current Ethereum wallets, which will therefore have to undergo significant changes, the developers have made a counter-proposal to EIP 1559. Dan Finley proposed an alternative solution called “Escalator”, which although it is very similar however, there are some important changes to the EIP. 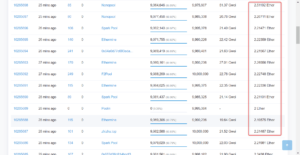 The user, instead of ordering a transaction with a fixed fee value, creates an “escalating order” and specifies the maximum amount that he is able to pay for concluding a transaction in the next block. All orders are put into a queue of pending transactions, which in a predictable way increases the value of the fee at the same rate as other wallets / payment processors. Thanks to this, miners can still select the highest values from the queue of pending transactions. The main advantage of this solution is that the value of fees is determined in an efficient and predictable manner, and thus protects users from paying too high transaction fees.

From the miner’s perspective, the state of increased transaction fees constitutes additional income and is welcome. After all, for the same work done, the miner will receive a higher salary. It is very important, if we want to take full advantage of favorable circumstances, it is worth checking whether the selected mining platform pays the miners commission from transaction fees or only the base remuneration for the creation of a new block. It is also worth checking what policy is applied in relation to prioritization in selecting transactions with an increased fee, it is appreciated that the pool tries to choose those with the highest fees. The only Polish Ethereum mining platform follows such a policy, consistently stating that both the base block reward and all transaction fees added to the block are 100% owned by miners working on the mining platform. There is a lot to focus on if the average value of the fees is the aforementioned 15-30% of the remuneration. Sometimes there are blocks of much greater value and such “gems” are most desired by miners today.