ŻET Mining Pool is a specialized network of mining pools where you can mine the most promising digital currencies. We run three servers for two cryptocurrencies: Ethereum and Ethereum Classic. We have been providing computing power to the blockchain network continuously since 2016, as of today our miners provide over 500Gh/s. Each of the servers is characterized by its different properties, which we will try to bring closer in the following publication, so that our miners will find it easier to choose the most suitable server for individual needs.

The PPLNS server is a classic node in the Ethereum network. Miners are paid when the pool finds a new block. As one mining round is relatively long, we recommend that you mine continuously over a longer period of time. This server is very similar to solo mining.

According to independent comparison websites measuring the profitability of the mining pools, Zetpool ETH PPLNS was the fastest mining pool in June, August and November 2021, and at the turn of February / April 2022. We have repeatability of the results over time. This is a classic node, a eth block appears every several hours on average. The best salaries in the long run. Compared to the ethermine, it’s practically like solo mining; if the pool hits a large block (5eth instead of the base 2eth), the monthly output for miners increases by 2.5% MONTHLY (!). We have an average of 50 blocks per month, so every single block is very, very important. PPLNS is dedicated to experienced miners – a series of three poor blocks will not put them off. They will take it easy will collect large salaries during the green series.
Currently, there is 320 Gh / s here.

long rounds, whereby the readings in short windows can be either much better or much worse than those from mining calculators;

the possibility of hitting large blocks, which can significantly improve the level of remuneration. This server is such a hidden solo mining, centralized mining pool such as ethermine, 2miners, flexpool CANNOT do this.

based on 5 years of historical data, the highest salaries for miners happened on this server

This server is characterized by the PPS (pay per share) method of remuneration. In practical terms, this means that the remuneration is updated on a regular basis, every several seconds. You mine for 5 minutes, you will be paid for 5 minutes of work under zetpool PPS. Similarly, if you work for 12 days, 13 hours and 36 minutes, you will be paid for exactly this period.

The second special feature is the proprietary ZET auto-switching algorithm that switches between different mining pools. The algorithm automatically selects the best rewarding ones in real time. What’s more, the mining pool list is updated and has been specially extended to include small, specialized ones like crazypool or zetpool PPLNS servers. The advantage is that it also chooses smaller ones, and thus the PPS server collects bonuses when there is a green series on small pools. PPS is dedicated to beginners and all those who value repeatability and predictability. Accruals are visible after a few seconds. Fast, simple and effective, while guaranteeing high earnings.
There are currently around 200 Gh / s here.

thanks to an adaptive ZET auto-switching algorithm, the pool follows the fastest servers in the world, therefore it guarantees a high level of remuneration all the time. No downtime known from the PPLNS server, but also no bonus for hitting a large block.
Click here to join Zetpool Ethereum PPS

This server is based on the mechanics known from the Ethereum PPLNS server. Therefore, every single block is very, very important. PPLNS is dedicated to experienced miners or all those who value the highest earnings, and at the same time are ready to calculate that you have to wait for a generous salary. In other words, if a series of three longer blocks is not a problem, then zetpool PPLNS will reward your hard work with interest. Solo mining server.

From August 2021 to March 2022, the fastest server IN THE WORLD, behind, among others ethermine, nanopool, hiveos. Perfect for parking 4GB graphics cards and ASICs with too little memory (unable to mine Ethereum).
Currently, there is approximately 60 Gh / s here.

long rounds, whereby the readings in short time windows can be either much better or much worse than those of calculators;

the possibility of hitting large blocks, which can significantly improve the level of remuneration. This server is such a hidden solo mining, centralized mining pool such as ethermine, 2miners, flexpool CANNOT do this.

based on 5 years of historical data, the highest salaries for miners happened on this server 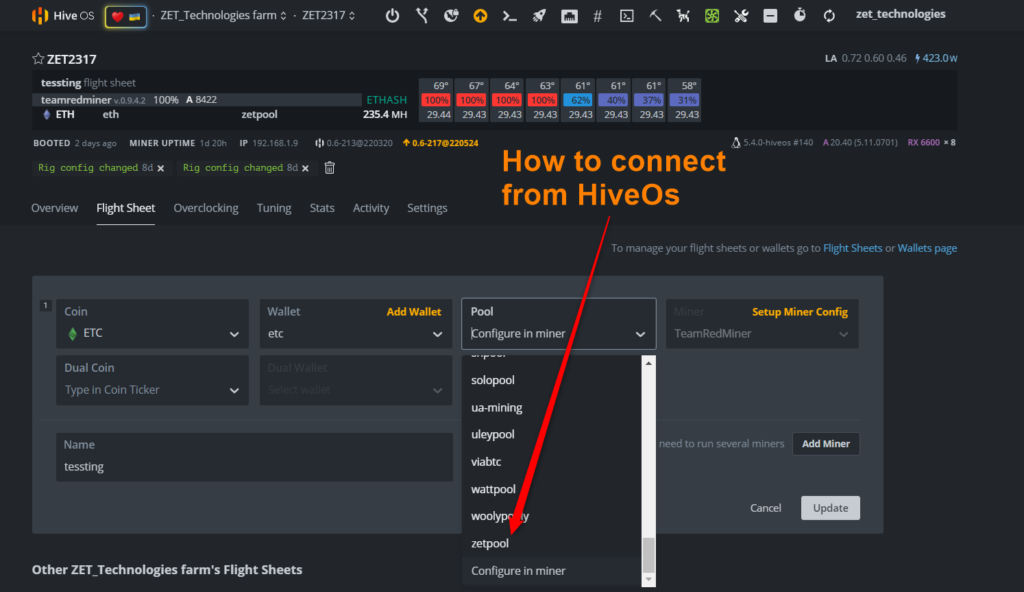 Finally, we present the cross-sectional results of the ŻET Mining Pool for the last year. It is a compilation of readings from different months of the most popular comparison websites measuring mining pools.
Thank you for your trust and we wish you many hashes. The nearest milestone goal is to reach 1 Th/s of computing power (1000 Gh/s). 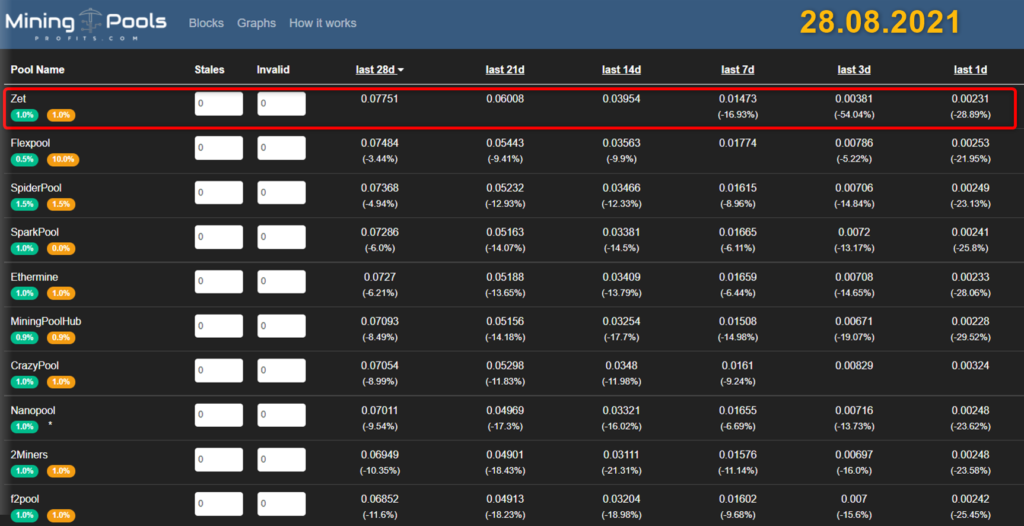 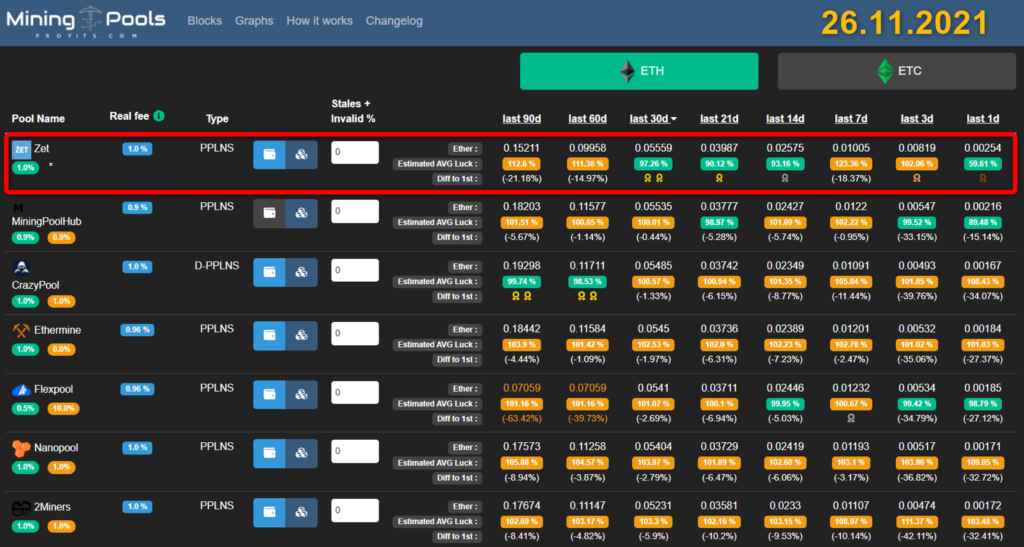 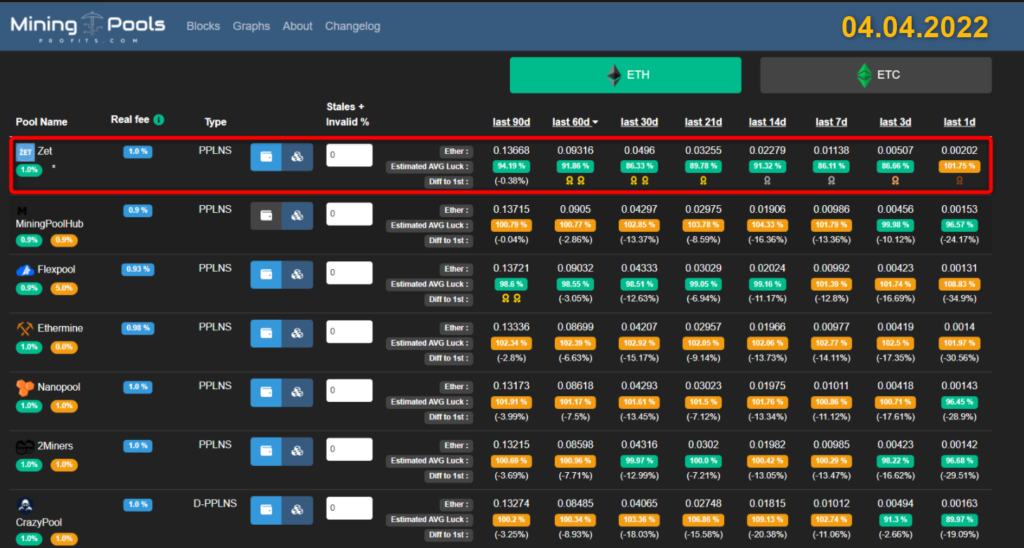